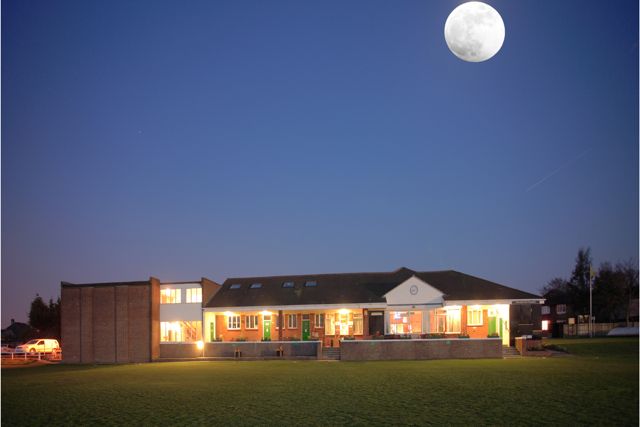 Football in the 1860’s was being formalised with public schools and university’s in the fore front of organised sport, and recognised rules for Association Football was accepted in October 1863.

Wilson’s Grammar School was reformed at Camberwell, South London in 1883, and quickly organised football matches. Mr House a new schoolmaster called a gathering attended by seventy boys, at which the school formed their football club playing in the colours of the Universities, dark and light blue.

The Old Boys of the school started playing matches against the School by December 1885, winning the first match 7-0, and annual matches were played each December. It was left to a young school leaver to form the Old Wilsonians Football Club in 1888.

Benjamin.A.Glanvill known to his friends as BAGS, organised this new club taking the secretary’s position, and his friends including the Bradbury brothers who would be the first Captain and Vice Captain of the OWFC.  B.A.Glanvill later became Treasurer and after a few years the President of A.F.A.

The first match was in December against the School, drawing 3-3, a second eleven was formed with those who were not select for the first eleven, with five matches played on dates that the 1st XI were not playing. In the first season 14 matches were organised, in the second season the two teams played 31 matches all friendlies. The club entered the London Junior Cup for the 1890-91 season, and within two season had fought to the London Junior Cup Semi Final, losing 0-1 to Clapton Res.

Season 1893-94 saw Old Wilsonians accepted as a Senior Club, entering the London Senior Cup and Surrey Senior Cup, while the Reserves entered the London Junior Cup. The following season entry to the English Amateur Cup, known as the FA Amateur Cup was accepted. By 1896 the first eleven had reached their first cup final, losing to Guildford in the Surrey Charity Shield by 1-3.

The club was on the increase with a 3rd XI being formed, and the club were getting stronger, with players being selected for their County sides. The club had obtained a lease on the Brixton Wanderers Cricket Club at Denmark Hill, Camberwell, but finances were in deficit. In April 1897 a meeting was called to find ways of meeting the shortfall, but help was not forthcoming, and a motion the Old Wilsonians F.C. should be liquidated was passed.

Seven years passed until on 14 July 1904 the Old Wilsonians Association was formed with the help of B.A. Glanville, S.W.St Cedd and E.J. Andrews, and the Football Section was reformed with E.J. Bingham as Secretary. The Football Club entered the season with three teams playing friendlies, and the following season the Surrey Senior and Surrey Junior Cups were entered.

The Amateur Football Association, now known as Amateur Football Alliance was formed, and the Old Wilsonians joined this ‘split’ within football, entering the inaugural A.F.A. Senior Cup, winning two qualifying rounds, only to lose to the Southern Amateur League side Croydon after a replay. In their first season in the A.F.A. circle F.M.Dickson scored 44 goals.

The first World War halted the Clubs football for five seasons, with football recommencing for the season 1919-20, and our entrance into the Southern Amateur League, the reserves playing friendlies, and a third eleven in the Old Boys League. The strength of the club was not up to the vigours of the S.A.L., and within one season we had left the S.A.L. to join the O.B.L. with our three sides. Success was hard to find, and our strength was still not good, thankfully the Reserve team came runners-up to Old Mercers Res on goal average in Division Three of the Old Boys League at the end of the 1923-24 season. 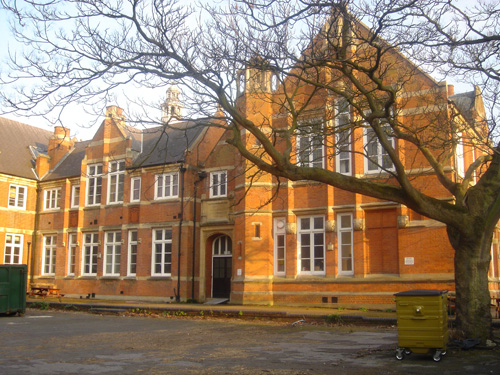 At the end of season 1928-29 the first eleven had fought through to the final matches, coming runners-up to Old Suttonians, but when promotion was refused by the Old Boys Leagues stating the “little disparity between bottom clubs in the Senior and the top clubs in  Division One no club would be promoted”.  Old Wilsonians put forward a recommended change in rules that the “the bottom club should be relegated and the top team promoted”, but this was only accepted for the season 1930-31. Old Wilsonians felt on a matter of principle they could not continue in the Old Boys League, and therefore resigned.

A list of friendlies for the following season was arranged, the club was accepted into the Southern Olympian League for the season 1930-31.  Two year earlier George Croucher had been elected as secretary of O.W.F.C., a post that he would hold for thirty nine years. The Southern Olympian League appeared to be a stronger league, our top two sides finding the opposition hard, but we did enjoy the moment when the 3rd XI took the top spot in the Minor Section of the league.

In the new league travelling was a new experience, visiting towns such as Watford, Southend and  Leigh on Sea in Essex. The Association had obtained a lease on land owned by Dulwich College, at Dulwich Common which had been used by Emmanuel Athletic.  This would be our new home for the next few years.

The 1934 season brought the first eleven 100 goals, with Thompson scoring 31, and yound Reggie Anderson 27.  At the end of the season Reggie joined Dulwich Hamlet, who at the time was one of the top Amateur Clubs in England.  Reggie was in the Dulwich Hamlet team that won the Amateur Cup beating Leyton 2-0 at Upton Park, and later represented England against Wales and Scotland. Reggie was given his England Cap for scoring three goals against Wales.

Once again a world war was to stop the Old Wilsonian football, Anderson was amongst the O.W’s who failed to survive the hostilities, being killed on a flight with Bomber Command.

The pitch at Dulwich had be used during the war by the National Fire Service, making the condition for football unusable, and a search for a new home was to begin. The school took over the lease from the old boys, and for the first season we became a wandering side, with the help of the Southern Olympian League opposition who allowed us to play all our matches on their grounds.

The club entered the Old Boys Cup in 1947, with a win over Old Colfeians, but in following round Old Latymerians took us to the cleaners to the tune of 1-7. The S.O.L was getting stronger by the season, but we could not keep pace  A small amount of success came in 1952 with the promotion of all three sides, but a lasting success was to elude us until Bert Bourner helped us in May 1959 to obtain the freehold of the Consolidated Goldfield ground in Hayes Hill, our new home. This was the catalyst for the increase in numbers and strength.

The Old Wilsonians opened the season on two new full size flat pitches, and a large influx of ten school leavers. Players were returning to the club Dave Martin from Dulwich Hamlet, and many from their National Service including Mike Kendrick, Brian Watts and Mike Harris.

Each year more school leavers joined the club and a fourth eleven was formed, once such player was Bob Bevan who started a monthly newsletter, first being published in December 1965. Bob was later to become well known as an excellent after dinner speaker, taking his humour to a weekly television show. 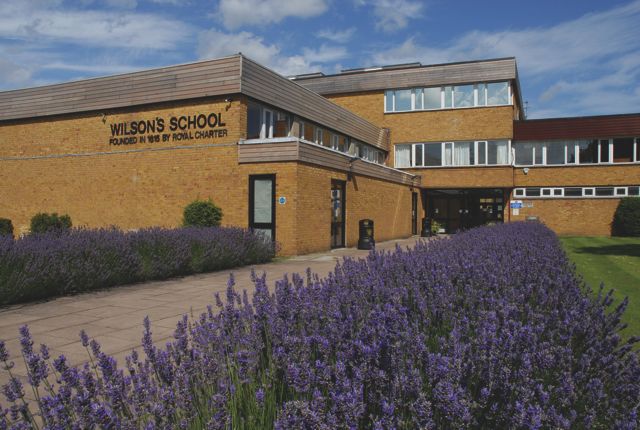 To show England the way in 1966 the first eleven won their division championship,  but we lost two good club members in 1967. A new school master at the school called John Burstow had joined the the Old Boys. John an excellent centre forward had scored 17 goals before March, and only a injury in the last eight matches held back his total. As luck would have it a young player called Gerry Reaseley took his place scoring 11 goals in those eight matches. At the AGM George Croucher our genial undertaker resigned from the O.W.F.C. to retire to Seaford, an young Mike Galvin took his place.

The newsletter had continued with Ron Ashdown taking over, later to pass to Gerry Reaseley, and finally to Mike Pike and John Drabwell. Mike Pike continues to this day as editor of the newsletter.

The secretaryship had passed from Mike Galvin to Tony Golborn, but due to work commitment at the AGM in March 1969 Mike Harris was elected as Secretary, and continued until 1980.  Success came in the next season with the 1st winning the divisional championship, and the following season the reserves won the AFA Kent Junior beating Catford Wand Reserves 2-1.

By 1973 the club had risen to seven teams and on the 1st March 1975 for the first time all seven teams were victorious .  Three years later the first eleven won the AFA Surrey Senior and Old Boys Senior Cups, finishing second to Old Parmiterians on goal average in the 1stDivision of the Senior Section of the Southern Olympian League.

The 1988-89 season saw the commencement of the Centenary of the Old Boys Football Club, but disappointment came with the 1st XI failing in both the AFA Surrey Senior and the SOL League Cup finals losing to Royal Bank of Scotland and Mill Hill Village. But the fifth eleven under the stewardship of Mike Kendrick won their divisional league and beat Glyn Old Boys in the Old Boys 5th XI Cup final. The following season the Old Boys felt that they should change leagues, and applied to enter the Old Boys League, where we would remain until 2004 when entry to the Southern Amateur League was attained. A number of divisional championships, and success in Cup Finals were attained in the following years.

Two players Terry Adams and Geoff Robinson, have reached their personal ambition, and have played 1000 games for the Football Club, with a small number in close proximity.  The highlight of members is that they are elected for a term office as President, but we have had three members who have passed into the higher office of Life President, these being George Croucher, Fred Massey, who as a schoolmaster and assistant head of Wilsons School, worked tirelessly for the O.W.F.C., and finally Mike Harris.

In 2013 the club will reach its 125 years mark, and with members still joining from Wilsons School at Wallington, and our home at Hayes still improving we would hope that a greater experience is still before us.

We are excited to present our all new website, providing a platform to evolve our club news, events, fixtures, results, photos and more; all delivered through a newly mobile and tablet friendly website.